Every year in the run up to Lent, Sitges erupts in a riot of colour covering all hues of the spectrum. Thousands of revellers take to the streets to sing, dance and party hard to the throbbing sounds of loud music. This is Carnival, a wild and spectacular event that’s celebrated throughout Spain and in many other countries. However, Sitges throws one of the biggest, noisiest and most exciting carnivals full of processions, floats, children’s parades, fireworks, scantily clad partygoers and outrageous costumes. During this time the carousing goes on well into the small hours with many of the bars staying open until sunrise. 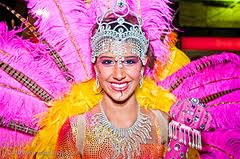 When the dictator Francisco Franco ruled, carnival parties were banned throughout Spain as he did not believe in the benefits of such ‘frivolity’.  The decadent celebrations were absent from the streets for 40 years, only coming back in 1981 when democracy was restored.  Sitges was one of the few places in the country to ignore Franco’s decree, keeping the party flame alive and kicking.  The Carnival ran continuously here throughout his rein.

The extravagant free fiesta starts on the Thursday before Lent with the arrival of the King of the Carnival.  He enters with a flourish, signalling the start of a week of good-natured fun and mayhem.  One of the most popular parades is Rua de la Disbauxa, the Debauchery parade.   There’s fancy dress, feather boas, plenty of sequins and lots of skin on show. Ostentatious and crazy costumes are not only worn by those taking part.  Many spectators don their own flamboyant outfits.

Although the town has a big gay community the party is not billed as a gay event.   Sure, many drag queens join in the fun, but so do people of all ages and backgrounds.  On average, more than 300,000 people flock to the streets of Sitges to celebrate and have fun.  Children are a big part of the revelries as well, being the stars of the show at two of their own parades.

If You Snooze You Lose

Hundreds of party animals line the streets for the Carnival’s ‘Race of the Dressed up Beds’.   Teams in fancy dress race decorated beds or bed-shaped vehicles along a marked out course.  Each team has at least five members, with one person in or on the bed and the others doing all the hard work by pushing, pulling and dragging.  Half of the fun is seeing the competitors’ costumes.  In previous years they have included cartoon characters, movie villains such as The Joker from Batman and an assortment of animal outfits.

The merriment climaxes with the Rua de l’Extermini (Extermination Parade), a massive cavalcade through the main streets of town.  Among the party people are drag queens who drape themselves in black to mourn the end of the high-spirited get-together.  There is also a televised battle of drag queens with some of Europe’s top drag performers making their way to Sitges as fast as their spray  tanned legs and kitten heels will carry them.

Although the start date varies, the Sitges Carnival typically closes on Ash Wednesday with the burial of the sardine.  A large effigy of the fish is buried on the beach to symbolise the end of the festivities and the start of six weeks of fasting.

The pre-Lenten parties and entertainments are a final blowout before Lent.  In the Catholic calendar this is a time of self-denial that marks the 40 days and 40 nights that Jesus spent in the desert prior to the start of his ministry.   In the days leading up to this time of abstinence it is perhaps not surprising that people want to let their hair down and fill their faces and bellies with good food and drink.

Sitges is proud to carry on this longstanding tradition, and to be in the town during this time is to share with residents some of the most exciting and joyous days of the year.

If you are thinking of experiencing the Sitges Carnival then make sure you book your accommodation well in advance as the town fills up quickly for the event. Sitges Hills Villas has a selection of villas and apartments in the town that are available for rent around Carnival time so get in touch at info@sitgeshillsvillas.com if you want to find out more.